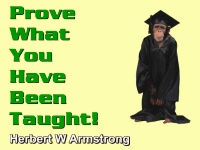 The World Tomorrow Radio Broadcast
Prove What You Have Been Taught!
Herbert W Armstrong

Well greetings everybody. You're living in a world that is just filled with religious confusion. I wonder if you ever stopped to think about how many religions we have in other parts of the world. We don't think of them much here in the United States; Buddhism, Confucianism, Taoism, Shintoism, Hinduism, the Moslem religion that fills the Arab world, and spills over into a great deal more, especially in Africa. Then the religion of Christianity, that pretty well engulfs the world, but especially in Europe and America and South America. The largest religion in the world is the Roman Catholic religion. And if you take what is called Christianity, including the Protestant religion, it is really by far, bigger.
Now you might have thought that some religion like Buddhism or Confucianism would be larger, because they are the religions over in India; and well, Hinduism in India, and China and nations like that, that are far more populous nations, and so many more people than there are here. But the Christian religion, as it is called, is by far the largest.
Now in the present series of programs I have been asking, "Where are we to find the one true religion? And how can you be sure? How can you know? How can you prove it?"

Anyway it took me six months before I had the answer to that. Now my study didn't stop then. But I had proved the existence of God. I had to go by what had been proved to me, to be the exact inspired word of the living God. I proved that God lives, that God is the Creator, and that He's the Great Designer, the Creator.
Incidentally, let me just say that I have a booklet here: 'Does God Exist?' I'd like to send that to you; and there's no charge at all. And there are two sections of it. One is, let me just read a little of it to you:
'Can the existence of God be scientifically proved? Where did the first LIFE come from? Can we know whether God possesses MIND power?' Then some of the subheadings; 'I Questioned God's Existence', and secondly, 'Don't Assume - KNOW!' Be sure, next; 'I Found PROOF!' Then next; 'Which God?' Next: 'Creation Without a Creator?' And next subheading; 'Amazing New Knowledge of Science.' And the next is a question; 'Has Matter Always Existed?'
And then follows another section on; 'SEVEN PROOFS THAT GOD EXISTS'. Seven scientific proofs. Now if you have never proved it you should. Don't go on just assuming that either God does or does not exist. But get the proof; be sure you know that you have a solid foundation under you. And I'm glad to offer you this booklet. No charge, 'Does God Exist?' I'll be very happy to send it to you.
Well now at last I had a firm foundation under me. I had decided, you see, before, that I was going to study into all of these religions. Now I knew that the other religions, that I mentioned awhile ago, the Eastern religions of Asia, and of Africa, and other nations, I knew they all had their sacred writings. And I decided I would go into that, as well as the Bible, which are the writings of so-called, supposedly, the Christian religion. At least that's what I thought at the time.
I really — well I'll come to that a little later, I found out a little bit differently as I went along. However they have adopted the Bible. Let me just say here, the Christian religion is attempting to read what they believe into the Bible. But it did not get their religion out of the Bible! Now that ought to knock you over. And it did me, it really did. That was one of the most shocking things I ever found in my life. I think I've mentioned before, one of the first things I noticed in the Bible was in Romans 6:23, I believe it is:
"...the wages of sin is death..." (Romans 6:23)
Now that just shocked me, I said; "Why the wages of sin is eternal life in hell-fire! But it's not death, because you never die there. You keep burning, burning, and burning, you never burn up." Well look, you know, one thing I never stopped to think. I'll tell you now, if you can show me any kind of material, whether it's a human being, or any kind of material, that will burn, and burn, and burn, and never burn up, I'll raise and pay you one million dollars. Now if you want to become a millionaire, there's a good way to do it. Just produce something, and give it to me that'll burn, and burn, and burn, and never burn up. Because I'll make several million out of that! Anyone that can have that, he can become rich in a hurry. Because a lot of people — if they didn't have to buy any more fuel, they just had something that would keep giving them heat and fire, and burning forever, and ever, and ever. Oh, what a wonderful thing that would be.
Well I proved the Bible is the inspired word of that God whom I had proved was the Creator of all that is.

Foundation of All Knowledge

Now I had a solid foundation under me. But I had to eat a lot of crow. You know I had to come to find out that the Bible didn't say, 'Thou shalt observe Sunday.' My wife had said; "Have you ever seen it?" And I said a while ago; "No, I didn't know anything about the Bible." "Well," she said; "You show it to me and I'll go back to Sunday."
So I really fished for it all over, but I'd never studied the Bible before. But I soon found there are a lot of things to help you in a study of the Bible, like a concordance. It'll give you every word in the Bible and where you can find it. All you have to do is have a word, and you can find where it is in the Bible through this concordance. So I began to check up a lot of these things. I found this about:
"...the wages of sin is death; but the gift of God is eternal life..." (Romans 6:23)
Now I said; "I don't need a gift because I'm an immortal soul, or I have an immortal soul." So I began to look up the word 'soul' in the concordance. And I found two places where the word is used where it just says in the same words:
"...the soul that sinneth, it shall die." (Ezekiel 18:4,20)
A soul will die. Then I found that God had said to Adam; "that if he took the forbidden fruit he would die." (Genesis 2:17 paraphrased) Now He didn't say; "Your body will die, but you'll go off to heaven." Or something like that. He just said; "You will die", the conscious man.
So as I say, my head really was swimming for a while. But I finally found that what the churches were saying is just the exact identical opposite, in most important cases, of what the Bible says. Now that is a shocker; that ought to knock anyone off the so-called Christmas tree! But then I had to find out how wrong I had been. And as I say my mind was swept clean. I had taken a beating. I had been conquered!
You know I think that most people who call themselves Christians, and profess Christianity, do you know how I think they came into it? I don't think they came into it the way I did. I don't think they found they had to take a beating, and to eat crow so to speak, and to admit how wrong they were. I think they have seen, perhaps they've heard me preach, they've heard our message, they've read our literature, and they say; "Well now that makes sense." And indeed it does; it does make sense.
And they say, "Well now, that sounds right to me. And so, I'm so good, and in my goodness I'm going to accept that because it's right, because it's good." I think most people have never come to really repent. I think most people that even claim Christianity, and let me tell you, all of you listening to me, you had better examine yourselves and see how did you come to believe what you believe.
I began to realize that I had just assumed what I believed, and now I had to prove it. And when I proved it, I found what I didn't want to believe. And I came to believe what was proved, whether I wanted it, or whether I didn't want it.
You tell me any founder of a religion, or any leader, worldwide leader of a religion who ever came to his belief like that? Go ahead and tell me, write me, tell me, I'd like to know, because I never heard of one. That isn't the way most people come to what they believe at all. They don't prove it, and prove it even against their own wishes and their own desires.
But my mind became into a condition where it was swept clean! And where I saw the Bible was the Word of the Creator God. That it is absolutely infallible , and that I could rely on what it says. Now I had a solid foundation under me. And from now on I just had to study — what does it say?
Now I hear a lot of discussion these days about being liberal or conservative. I wrote a man who was concerned about that question just the other day. And I said; "Well I'll tell you, I don't claim to be liberal or conservative. I just believe what the Bible says. Jesus Christ is the living Word of God, the Bible is the written Word of God, and it is Jesus Christ and His Word in writing. And I believe what it says. If it says; "...the wages of sin is death..." (Romans 6:23) I believe it's death, and not eternal life in hell-fire.
Now I just came to believe these things, because I proved it! I'd proved the existence of God. I had proved the authenticity and the authority of the Bible. Well, as I say, I think that's a pretty rare experience; you might check it with your own.