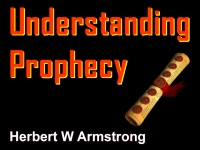 Ladies and gentlemen, greetings! Back in World War II Winston Churchill addressed the United States Congress. And he said to our Congress; "There is a purpose being worked out here below." Now certainly that implied a higher power above doing the working out.
But if there is a purpose being worked out here below, not very many people know anything about it; not very many people seem to be concerned. If there is a purpose, that purpose has something to do with why you were born; why I was born; how did the human race happen to be on earth; how did we come to be here? We didn't just happen from some happenstance. The first life had to come from life. It didn't come from some unknown process like electrochemical action, or some unknown process, by resident forces, no mind, no planning, no design. Oh no, my friends, there was planning. There was mind back of it. There was a supreme power and there was purpose. And there is a purpose being worked out here below. Not very many understand it, but the one doing that working out above reveals that purpose to us.
Now it's revealed in the world's best seller, the book that sells more copies than any other book, and has been selling that way for the past hundred years and more. And yet it's the book that nobody seems to understand. It's the book that, even if they understand nobody seems to believe, because when our Maker speaks, people don't seem to want to believe what God Almighty says. But He tells us why we're here. He tells us what that purpose is. He tells us what is being worked out.
Now one-third of the Bible is devoted to prophecy; one-third of the Bible is telling us what is going to happen. Some of those prophecies have already been fulfilled right on the dot in exactly, precisely as they were given.
However, most of the prophecies, ninety percent or more, are yet to be fulfilled, and in our time. You and I are living in the time when biblical prophecy is beginning to be fulfilled as never before. Most of the prophecies are from now on the next few years. I can't tell you whether it's a couple, or three years. I can't tell you whether it's five or ten years. I know it's in this generation. And it's going to affect you and your life! And so you'd better listen, because you're betting your life on it. Your life depends on what is going to happen.

Only Christ Worthy to Open the Book

Now of all of the books of prophecy in the Bible, the very last one is the most mysterious and the least understood of all. I don't think any of them are really understood by very many people. But the book of Revelation, the last book in the Bible, is a book of mystery. It's a book that no one seems to have understood. I'd like to read once again, as I've done several times in the last few weeks, verse one of chapter one in the book of Revelation - just once again:
"The Revelation of Jesus Christ..." (Revelation 1:1)
Now revelation means; revealing, it means, opening up; it does not mean, closing and sealing. But listen a minute - this book was closed and sealed, and I'm going to explain why in just a moment:
"The Revelation of Jesus Christ, which God gave unto him, to shew unto his servants things which must...come to pass; and he sent and signified it by his angel unto his servant John:" (Revelation 1:1)
Now the apostle John wrote this book about 90 AD, he put it in writing, he wrote it. Now the book, as we see in chapters four and five, was in the form of a long scroll rolled up. Not a book like we have today. We're using books in a different style, a different form, today.
When I was over in China recently, in the library, they were showing me some of their ancient manuscripts. And they were all long scrolls rolled up. They had them, not sealed, but they had them bound with rubber bands that they just stripped off.
However, this scroll was sealed with seven seals. And you can only open one seal at a time. And that'll let you read a little of it and there had to be another. But there were seven seals and it was a closed, sealed book, and the thing is, you read in chapter five; "No man on earth was able to open that book to our understanding." (Revelation 5:3 paraphrased), so that we can understand it. It said that only One qualified, and that was called the One who was Jesus Christ, called the Lamb of God. No one else was able to understand it.
And so in the vision that John saw, a vision that was supposedly up in heaven at the throne of God, and there was Christ standing at the right hand of God. God the Father on the throne had this book. Jesus came up and took the book out of the right hand of Him that stood there. Now others around there, angel, angelic personages, were crying out:
"...Who is worthy to open the book..." (Revelation 5:2)
No man is able to open it to our understanding. Now many men have tried to do it. They have not made it plain because they have not been able to understand it themselves. They have been misguided. No, only One was able to open the book to our understanding. Now it was sealed. But now it is the revelation, the revealing, of Jesus Christ.

The Meaning of the Four Horsemen

Now then; next I would like to get back to Revelation 6, and I want you to notice now, after we get through with the four horsemen, and I have covered all of that in previous programs:
"And when he had opened the fifth seal [now here comes the next seal], I saw under the altar the souls of them that were slain for the word [that is the Word of God], and for the testimony which they held:" (Revelation 6:9)
The Word of God is the Bible. They believed the Bible; not very many do. But they were martyred. Now this is just as though they, as if they were still living, and their voices were crying out. It's just like one place Jesus said; "...the blood of righteous Abel cries out from the ground." (Matthew 23:35 paraphrased). And it was the blood that was crying out in that case.
"And [now these martyrs] cried with a loud voice [those are the martyrs that were killed back prior to 70 AD and shortly after that], saying, How long, O Lord, holy and true, dost thou not judge, and avenge our blood on them that dwell on the earth?" (Revelation 6:10)
And it seems like they were getting impatient. Of course the Bible says that; "...the dead don't know anything..." (Ecclesiastes 9:5 paraphrased). Maybe you didn't know that? Someday we'll get around to showing you all those things in the Bible, because people have never understood the Bible anyway.
"And white robes were given unto every one of them; and it was said unto them, that they should rest yet for a little season [that is, in their graves, before the resurrection], until their fellow servants also and their brethren, that should be killed as they were, should be fulfilled." (Revelation 6:11)
You know there's so many things in the Bible that work out in a duel fashion, a first and a last, a first and a second. Usually the first is physical and the second is spiritual, but not always, and not in this case. But there's another martyrdom yet to come. Now that was the fifth seal. Let's go back and see what Jesus said was the fifth seal back in Matthew 24, verse nine now:
"Then shall they deliver you up to be afflicted..." (Matthew 24:9)
Now the first time was prior to 70 AD and after that. They were delivered up to be afflicted and they were the ones that were crying out; "When will you deliver us, or avenge our blood?" (Revelation 6:10 paraphrased).
"Then shall they deliver you up to be afflicted, and shall kill you: and ye shall be hated of all nations for my name's sake." (Matthew 24:9)
So that then is the fifth seal. It continues on down to verse twenty-one.

A lot of these things were; "...the beginning of sorrows" (Matthew 24:8). And coming to verse twenty-one it goes into a little more detail of a time that is yet ahead and has not come yet. It's just ahead of us a very short time. It's a terrible calamity such as never happened to this earth in all the time of human history. Now verse 21:
"For then shall be great tribulation [how great will it be?], such as was not since the beginning of the world to this time, no, nor ever shall be. And except those days should be shortened, there should no flesh be saved [alive]..." (Matthew 24:21-22)
That is the correct translation. The Moffatt translation renders it that way, and some of the others. The King James it says just 'saved', but it's not talking, spiritually, about salvation. It's talking about being saved alive. In other words we have come to the place where there are weapons of mass destruction that can erase human life from the face of this earth! And except those days, except God intervenes, man would destroy man, and in our time in the next few years! But listen, the next verse:
"And except those days should be shortened, there should no flesh be saved [alive]: but for the elect's sake those days shall be shortened." (Matthew 24:22)
God is going to intervene before that happens. That is the time called by many; 'The Great Tribulation'. That is going to come, really that's the time of Satan's wrath, not of God's wrath. But very few people seem to understand it.

The Day of the Lord