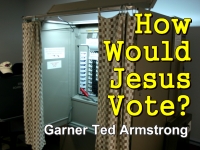 A new President in the Soviet Union and an election year in the United States, how would Jesus vote for president? If Christ were on earth today what would be His choice of a leader for the United States, or for Britain, or South Africa, or Australia, or for that matter for any nation? What type of man would He support, if any? What type of platform would He vote for? Would Jesus be inclined to be radical, conservative, left, right, how would Jesus vote for president?