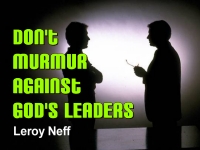 There has been a leader in God's Work who has prompted a host of criticisms and comments as I go through some of these comments I would like for you to see if you know who I am speaking of. It seems that some continually complained about how he ran the Work and some have said that he took too much on himself, that he was egotistical, that he exalted himself, that he was inaccessible, that he was hard and he was harsh and some even claimed that he set himself up like a prince over the people or others you know that he just lifted himself up as far as his position or office was.