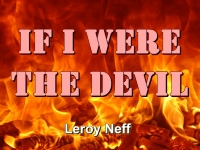 
Sermons
If I Were The Devil
Leroy Neff

If I were the devil, and I'm not going to exhaust the subject but I want to hit some of the main points today. In order to set the stage, to get the overall picture I'd like to turn the book of Revelations, sort of by way of introduction, Revelation the 12th chapter, Revelation 12 and about 2 or 3 verses we want to read here. Verse 9 it mentions that the great dragon, and the great dragon was cast out, that old serpent called the devil and Satan which deceives the whole world, some of these points we'll be seeing a little later as well. But he was cast out into the earth and his angels were cast out with him. So this is telling about a war in heaven.