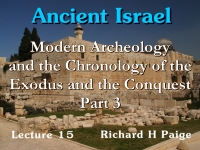 Ok, we're continuing with our investigation of the matter of the Israelite conquest and the exodus from Egypt, probably the most, single most complicated area in Biblical study today. We've seen that what had been the traditional digging of the 15th century, 18th dynasty of Egypt ran into a great deal of trouble when archeology began to be very active in Canaan, rather I should say Palestine, especially in the 1930's and 1940's because there were so few positive matches between the accounts of the Bible relating to the conquest and what could be shown to be said archeologically.