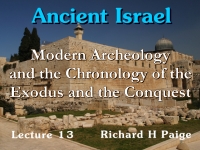 To begin this lecture in Ancient Israel we're going to be focusing on the archeological revolution that took place in the 1930's and 40's especially under the leadership of men like William Foxwell Albright whose considered probably the Dean of Palestinian Archeologists. It is this material evidence that they uncovered during this series of activities in Canaan both east and west that caused the scholars to begin to question seriously the chronological information provided in I Kings 6:1 and began to question the traditional date of the exodus that would have been in the 15th century.