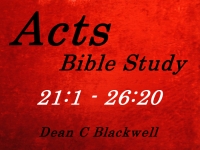 We'll pick up with chapter 21 then (Acts 21:1), well anyway coming on in chapter 21; "it came to pass, after we", now noticing "we's" again Lukes with Paul and a companion; "we were gotten from them, and had launched, we came with a straight course unto Coos," which is a Island in the Agian; "and the day following unto Rhodes, and from there unto Patara: And finding a ship sailing over to Phenicia, we went aboard, and set forth. And when we had discovered Cyprus," Now there again if you put the King James version as infallible, you'd think there was nobody who knew about the Island of Cyprus until Luke and Paul discovered it.

Transcript of this Bible Study coming.