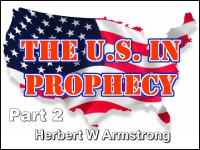 Well greetings friends. This is Herbert W. Armstrong with the Good News of the World Tomorrow. And, yes, there is good news ahead. But today's news once again is not good. I've been telling you that top scientists say that we have come to the time when all human life can be destroyed. No human life would be left on the face of this earth. My friends you're facing that kind of a world — why don't we wake up!
Now I was reading to you in one of the prophecies because you can know what's going to happen. One third of your Bible is devoted to prophecy and about 90% of that to the present and the immediate future during the next twenty or twenty five years; and you can know. Oh I know the prophecies have been closed and sealed until now. As one of the prophets was inspired to write — the prophet Daniel — that the words were closed and sealed till the time of the end. Daniel couldn't understand what he wrote; he merely wrote it down. It was inspired by the Almighty God. But now my friends we have come to the time of the end. God's time has come to lift back the curtain on the mysteries of God that have been concealed until now. And now we can know.
Now the keys are available that open up these prophecies, that unlock the doors of prophecy that have kept them closed and sealed until now. This one-third of your Bible that is so neglected, that part of the Bible that is scarcely ever read — that part of the Bible that explains today's news, and shows you what is the real significance behind today's world news. The news commentators, the news analysts on radio, on television, or the columnists, or the editorial writers — they cannot understand today's news. You can't understand the news unless you know two things that they don't know. First, the purpose being worked out here below, and secondly, what is definitely foretold in biblical prophecy of what is to happen in working out that purpose.
Now you can know the major events of the world and the turn of events as they're going to take place from here. I was reading now as we're going through Jeremiah, specific prophecy now, and in the thirtieth chapter I was reading I believe in the preceeding program, God had said of our people, that "I will save you from afar...[and so on. Then] Fear not, O Jacob my servant... nor be dismayed, O Israel" (Jeremiah 30:10): and you might say America or the United States and so on.
He said that we are to be saved and that everything is going to come out alright. But also, He had said that "I will not leave you [altogether] unpunished." (Jeremiah 30:11)
He had also said that. And He said that our sins were greatly increased and that's why these things are coming on us. Now this prophecy, foretelling a time of captivity, of invasion, actually of our nation unless we'll turn to God and do those things that will prevent it and we've been going into that. Now He said that those things are coming on us — but when? This is not talking about something that happened way back there 600 years before Christ. Look at the very last words of this chapter. In the 24th verse, the very last words, "In the latter days you shall consider it" (Jeremiah 30:24). We're in those latter days now at the time of the end. We've come to the time when this is to be considered, when this is to be fulfilled, when this prophecy is going to take place.

So my friends, there is the good news that is coming on beyond today's terrible bad news. Now, notice here in the next few verses.
"Thus saith the Eternal; A voice was heard in Ramah, lamentation, and bitter weeping; Rachel [who was really the mother of our people now], weeping for her children refused to be comforted for her children because they were not [or as not]. Thus says the [Eternal], Refrain thy voice from weeping, and thy eyes from tears: for thy work shall be rewarded, says the [Eternal]; and they shall come again..." [where from?]. (Jeremiah 31:15-16)
When our people, when Israel goes back my friends to Palestine — the land God gave our forefathers — where are we coming from? Every place where it designates where we're coming from will tell you the same thing in your Bible. "THEY SHALL COME FROM THE LAND OF THE ENEMY." NOT from our own land in North America but from the land of the enemy where they're going to be scattered. This is in too many places in your Bible my friends for you to misunderstand. If you only open your ears and open your minds to the truth of God. It's going to be a great exodus — so great, they won't even remember the Exodus from Egypt under Moses. But this coming great exodus under Christ out of Babylon will be not from the United States and Britain, but from the land of our enemies.
"And there is hope in thine end, saith the [Eternal] that thy children shall come again to their own border. I have surely heard Ephraim bemoaning himself thus. Thou hast chastised me, and I was chastised, as a bullock unaccustomed to the yolk: turn thou me, and I shall be turned; for thou art the [Eternal] my God." (Jeremiah 31:17-18)
That's what we'll finally say. Oh my time is up. I'm going to have to break off there. Now we're coming into this new covenant too in this chapter a little later. Some mighty interesting things coming tomorrow.