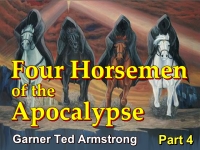 And there went out another horse that was red: and power was given to him that sat thereon to take peace from the earth, and that they should kill one another: and there was given unto him a great sword. - The world's first atomic bomb, detonated in the American western desert, this before the dropping of Fat Boy or Little Boy on Hiroshima and Nagasaki was destined to change your life and mine and that of all the remainder of human kind. From the explosion of the first atomic and later the first Hydrogen bomb the world has never been the same.