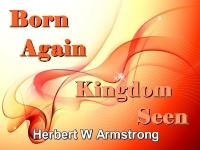 Herbert W. Armstrong founded the Worldwide Church of God in the late 1930s, as well as Ambassador College in 1946, and was an early pioneer of radio and tele-evangelism, originally taking to the airwaves in the 1930s from Eugene, Oregon.
HA242A

The message that Jesus Christ His gospel is not known in the world today, because He came and preached it in the years from 27 AD until 31 AD, probably beginning in the fall of 27 and ending in the spring of 31. He preached to thousands upon thousands, but there were only a hundred and twenty who actually believed what He says, you read in the fifteenth verse of the first chapter of the book of Acts after He had preached three and a half years to many thousands of people and He was very God in the human flesh.