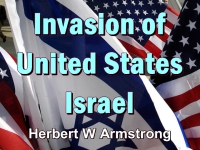 Well greetings friends. This is Herbert W Armstrong with the Good News of the World Tomorrow.
Did you notice the newspaper this morning? Well I did, and the news is not good, and that's the way it is. And there is no peace in this world now, and this world is going to go through a lot of troubles in the next few years.
Now, as I read the newspaper this morning, you know what I read? Well I tell you, I read what has happened mostly within the last twenty-four hours. It's already happened, it's news, of course each paper, or each news service tries to scoop the others, by getting the latest news first and all that sort of thing. But, still it's news that's already happened.
But, you know there is another, I don't think you could call it a kind of a newspaper either? But where you can see the news headlines of, not only tomorrow, but next year Ś and five years from now and ten and twenty years from now. And you don't need to go much further than that ahead. You go up about that far ahead and we are going to have this utopia. We're really going to have it, yes in your lifetime and mine.
But in the meantime, we've got a lot of lessons to learn. And in the meantime, I want to tell you that frightful things are going to happen on this earth. Do you know what they are? Why wait and read about it after it happened? And maybe it is going to hit you and you won't be around to read about it, when the morning newspapers come out. But you can read about it before it happens in advance. And you can find the way you can be protected, so it won't happen to you. Now that would seem to be good sense, wouldn't it?
But there's only one place, because no human being knows what's going to happen. Let's see, was it way back in World War I and President Wilson, or was it President Roosevelt in World War II who said that we never know what a single day may bring forth? Yes in war time we begin to realize we don't know what a single day may bring forth.
But, we think we are in a time of peace now and we're growing rather dreary and drowsy and rather stupid too, and dull. And so we are not paying much attention, but let me tell you my friends, it's only a quietude on the surface. Underneath there things brewing Ś underneath there are plots being laid right now. Underneath there are men that haven't come into the public limelight yet, that are going to be big men, big villains in the world, within ten or fifteen years from now. They are already here, but we don't know who they are yet, because they haven't appeared in the public big news headlines as yet.
And terrific terrifying things are going to be happening, and you can read all of that news in advance. Now that ought to be important. And it's in the biggest seller in all the world. A book that is in more homes than any other book, that more people buy than any other book Ś year in and year out. And one third of that book, the Holy Bible, is devoted to telling you what is going to happen. Next year, five years, ten years, fifteen years from now.
Why aren't you concerned about it, well you say, who can understand Bible prophecy? Yes, that's true, who can? And they certainly didn't understand it, they never have understood it, but as I've told you so many times, the prophecies have been closed and sealed until now, and we can understand them now.
But do you know of any church denomination that will say, well when we were founded back here a hundred and fifty, two hundred and fifty years ago, or whatever it was, that we couldn't understand the prophecies then. But they're open now, and we will accept them. Why, you know I've talked to heads of church denominations and they feel Ś they're human men Ś and they feel that they would be afraid to make such an admission, because then people would say, well then you weren't teaching all the truth before. You admit you've got something that you didn't understand then. Well, we have lost confidence in you. They are afraid that's what people would say.

What Denomination Was Christ?

But nevertheless, it is true that there were the two ancient nations in the twelve tribes of Israel. One called the house of Israel, the other the house of Judah. The house of Israel had their capital in Samaria. The house of Judah that came to be known as the Jews or the Jewish people with their capital in Jerusalem. Now they were divided into two different nations. The house of Israel had been taken captive 721 BC. They had been driven up to the southern shores of the Caspian Sea by Assyria.
And by the time Jeremiah wrote, the Jewish people were being taken captive about a 130 years later, and Jeremiah was among them, and was an emissary among them. A sort of a go-between, between the kings of Judah and the king of Babylon who took them captive at that time. But I want you to remember that this was a hundred and thirty years when Jeremiah was writing after the house of Israel had gone out and been taken captive, for oh a few years it might have been, ten, twenty, thirty, years that they lived up there as slaves and as captives of the Assyrians. But then they began to escape and to migrate north west over in toward Europe. And there they were lost sight of.
But, my friends, the very beginning of the British people and the nations of northwestern Europe that we find, we find them coming from that very point where the ten tribes were lost sight of. And by prophecy, we find that they were to be in the islands due northwest of Jerusalem. The islands in the sea, and you take a map or a globe and you measure exactly precisely north west from Jerusalem till you come to islands in the sea and you come to the British Isles.
And then some of them finally were to come over here to America and be the United States. And so we are actually now the descendants of the ten so-called lost tribes; they're no longer lost. I know that's ridiculed, that's jeered at, but you can not understand your Bible, unless you know that that is true.
Write for this booklet, 'The United States in Prophecy.' Check up honestly with it and get rid of prejudice and see if you could have been mistaken, if this could, after all, be true. This thing they love to call fanaticism, oh they love to call it anything, because how many people do you know that will accept new truth? Do you know why they won't accept it? Well I've been disillusioned, I've found out why. Now you be the judge of what you believe and believe what you find in your Bible. Get this booklet, look at it in your own Bible and believe what you find there.
Alright now I am going to proceed with the assumption of what I know to be true and which you can prove to be true, if you will. That we are then the house of Israel in this day.

Now, a lot of things are said here by Jeremiah about us, a lot of things. Now here we are in this first chapter of Jeremiah. And we've gotten into this prophecy, now in the very fourth verse of the second chapter, just to show you that, well Jeremiah in the first chapter was made a prophet to the nations Ś that's Israel and Judah. Now, he was in Judah. He was commissioned to tear down the throne in Judah, to root it out, to tear it down, but he was also commissioned to build and to plant. To build and plant what? Why the very throne that he tore down in Judah.
And so he was to build it up into Israel as other prophecies say, I think that's in Isaiah Ś I believe it is. You'll get it in this booklet, 'The United States in Prophecy.'
Now then, he was a prophet then to the house of Israel, as well as to the house of Judah. Now he says here beginning in the second chapter and the fourth verse:
"Listen to the Eternal's word, O house of Jacob and all the families of the house of Israel:" (Jeremiah 2:4 Moffatt)
That's not the Jewish people. That's the people, that at the time, were in the British Isles and north western Europe up there. Some of them in Sweden, and Denmark, and Norway, and in Holland, and in Belgium, and in the British Isles.
Now then, coming to the seventh verse, the second chapter of Jeremiah's prophecy. Let's see what these prophecies are saying. Now one of the keys is that we are the House of Israel and another of the keys is duality. That in the prophecy it speaks of things that pertain literally, to happen then to one of the nations, but anti-typically, that was only a forerunner the big event, the main event that this prophecy is for, is for us today that's going to happen in the next few years.
Now there is another key, without which they couldn't understand prophecy. It is because they didn't know these things that they didn't understand prophecy fifty years ago, a hundred years ago, and all of that time Ś but, today we can know. Now let's get into tomorrow's headlines today. Here they are, listen. God continues here and He says, beginning in verse eleven:
"Has any nation ever changed its gods (gods that were no gods)?" (Jeremiah 2:11 Moffatt)
In other words idols that are not actually gods, but they call gods. Did any Gentile nations ever change its gods and take over a different kind of a god, no. Now just think of that for a moment. There is no record in history of a nation that as a nation had some kind of god, think of all the gods of these nations. There was Jupiter and the gods of the ancient nations. Iris and Osiris and many names that they had. Actually they were only names for the ancient Nimrod that you read of in the tenth chapter of Genesis and his wife Semiramis, but they were named different things. There was Easter. It was spelled I-S-H-T-A-R in Assyria and the ancient Babylonian name was A-S-T-A-R-T-E, but it wasn't pronounced 'As-tar-tee' as you might think in sounding it out in English. It was pronounced Easter as we call it today. And Easter, believe it or not, celebrates that old goddess Easter.
Now the pagan nations never changed a god or a goddess when they had one. They never gave up their religion, or changed their god; it was never done. "But, [God says] my people have changed their Glory for a useless thing!" (Jeremiah 2:11 Moffatt) They HAD THE REAL GOD, THE LIVING GOD, THE CREATOR GOD. THE GOD THAT CREATED FORCE AND ENERGY AND EVERY POWER. And that rules the universe by that very power, because He sits at the controls of the whole universe in His high heaven.