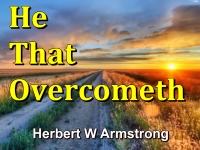 Well thank you everybody, and let me say, not only greetings to you here in this beautiful auditorium, but also to the several hundred over in Perth who are listening in to this just now and are with us. And let us understand that we are having fellowship right now, not only among ourselves, not only with our brethren over in Perth; but with Jesus Christ and with God the Father as well, because they are here in presence in their Spirit. They are here with us and in a way this is a very important occasion.
I want to say to our brethren over in Perth, if I may, that just shortly before I came to this service, Mr Morton and Mr Fahey presented to me the scroll that came from our brethren over in Perth. A very beautiful scroll and with the signatures of all of the brethren over there. And we are now preparing a special exhibit in the Hall of Administration, at the Headquarters of both the Worldwide Church of God and Ambassador College in Pasadena, and that scroll will be placed there for everyone to see, who comes into the Headquarters building there. And I am very, very grateful for everything of the kind. I have had some kind of a message like that, with the signatures of all of the Church members, from Churches all over the world. And they are all going to be in this exhibit. Also from students at Ambassador College.

The Missing Dimension in Knowledge

Man Does Not Have Life

Lucifer Given Rulership of the Earth

God Recreates the Earth for Man

God's Spirit Shut Off Until Christ

Eternal Life Possible to All in God's Plan

Understanding Given to the Firstfruits