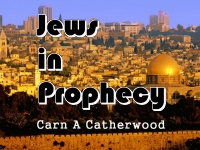 Because of TV and the marvels of mass-communication millions of people have had their attention focused quite often on the problems and the upheavals and the commerce of a people that we collectively call the Jews. Most of you have met a Jew at one time or another in your life, maybe you've met many, maybe you've worked with Jews at different times and in Biblical terms of course they're called the house of Judea to be differentiated from the house of Israel. This evening when you pick up a newspaper or you read reports that the Jews have a little nation over in the Middle East now and have lived there now for about 30 years now, not 3,000, but 30, not a long time.