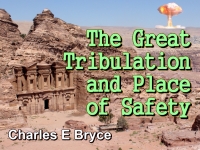 The Bible talks about a time so horrible that it will be worse than any time before and any time after, that's hard to comprehend, with the human mind. Worse than the Dark Ages, the Bubonic Plague, all the World Wars that have gone before, pandemic diseases, Hitler's death camps, Stalin's death camps, Pol Pot's murder of millions of people in Cambodia, worse than Hiroshima and Nagasaki, worse than all of that, much, much worse.