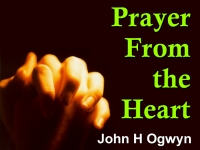 You know there's a lot of things that are going on in the world around us and in the news, the events in the Middle East that are shaping up and the circumstances with the imminent death of Yasser Arafat and the things that are going to come, and the lets say, the consequence and the result of that. One of the things that I think, you may have heard by the way of a news item, is the fact that President Bush is being urged, that he will really make peace in the Middle East a real center point of his second administration, to bring peace between the Palestinians and the Israelis, of course if he makes that a real center point of his efforts, he won't be the first one, he won't be the first one to try it and he won't be the first one to fail at it.