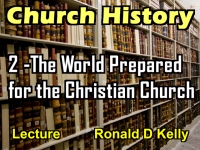 Last time then we began to see how well in advance of Christ's first coming when He was born of the virgin Mary, that God began to prepare the entire world for the arrival of His Church and we talked about how Babylon brought the concept of world rule and God began to use these pagan empires not only to fulfill prophecy's given by Daniel, but in order to prepare for the New Testament Church, to establish world government was Babylon's contribution...

The World Prepared for the Christian Church

I. Galatians 4:4 The fullness of times
A. God had a schedule
B. World had to be prepared for God to send His Son
C. Why send Christ at the time He did?
1. Why not in Adam's day?
2. Why not Noah's time?
3. Why not have Him succeed David
4. Why wait?

III. God began to prepare by a single world ruling empire
A. Atmosphere of World Ruling Empires created by God - 600 B.C.
B. Babylon = head of gold
C. This was the first real Civilization

IV. The next empire was Persia
A. Persians - very warlike and crude.
B. They spread world rule
C. They were the first to institute a real mail system to keep control of the empire
D. They had a different approach to government
1. Cultural pluralism
2. They thought that if they let each culture keep it's particular forms of worship that all the gods would be pleased and they would be that much more of a greater empire for it
3. Cyrus made a decree that the Jews could return to their homeland and worship as they wanted
4. This started the Diaspora
a. Many Jews not return but went to other areas
b. They spread to major commercial centers
c. Created a need for Jews to preserve their culture
d. Built synagogues that led to the dispersion of God's law among the Gentiles
e. These in place for Paul to travel to with gospel

V. The Greek Empire
A. Greeks - 330-30 B.C.
1. Brought in culture, civilization, art, educational system, and language.
2. Infused world with desire to learn.
3. Greek education system basis for ours today
a. Greek became the language of education
b. Greek was the language gospel preserved in
4. Greek philosophy gave civilization a sense of the importance of man and a humanitarian approach
5. They allowed the Jews to live and prosper
6. Antioch - second greatest city.
a. used by NT church, along with Athens, Corinth, and Ephesus.
7. Fell about 60 B.C. to Romans led by Pompey.

VI. Romans
A. No new cultural developments - carried on with Greek ideas.
B. Began to rise 100 years before Christ, solidified by 31 B.C. when brought the eastern part into empire.
C. Empire extended from Britain through France over to India.
D. In building the empire they did, they contributed by vast technological improvements.
1. They built roads to carry war machines and armies
2. They also improved the mail system greatly so Paul's epistles could travel fast
3. They developed a great seaway system for trade and troops that would later be used by God's apostles
E. Government
1. Rome ruled "Laissez-faire" - People ruled them-selves; not dictatorial.
2. They let kings rule under Roman authority.
3. local governments - permitted as long as allegiance to Rome was maintained.
4. One third of the world population under Roman rule.
F. Herodian family ruling
1. Herod the Great ruled in Palestine around 40 B.C.
G. Religions
1. Permitted all, though new religions not allowed under Roman government.
2. Christianity viewed as sect of Judaism
a. Sabbath not changed.
b. Passover and food laws observed.
c. Had peace with Pontifex Maximus (Augustus Caesar).
d. Church could take its message.

VII. The world prepared for the gospel then and now
A. There was very little progress after this
1. 1500's printing developed to set the stage for the protestant reformation so there would be a climate for God's truth
2. Industrial Revolution - 1800's
a. Steam engine made production and travel increase enormously
b. World never to be the same
3. Marconi invented radio
4. World shrunk in size
5. TV, mass communications, and computers all happened in the last 150 years
6. Without these the gospel could not go out as effectively as it has.
7. The world has been prepared for God's work, and Christ's coming, today, just as it was for His first coming

** Augustus was the Roman Caesar who most established the
Empire, preparing it for Christianity.

Please Note: The lecture notes do not match the audio files exactly for the Church History Lectures. The note and audio files are from different class years, but do for the most part cover the same material.