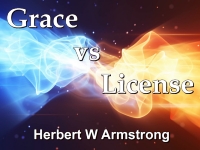 And greetings friends. This is Herbert W Armstrong with the Good News of the World Tomorrow.
Listen, could anything be more surprising today than to learn that what we have believed was the Gospel of Jesus Christ is not the Gospel of Christ at all? That in just two or three short generations after the original Church of the apostles; the original faith once delivered to the saints was rejected, buried under a rubbish heap of pagan teachings and customs and traditions? That pagans appropriated the name of Christ, attached Christian names to their pagan doctrines and practices way back there in the second and the third centuries, or, yes, even in the latter part of the first century and they called those things Christian? Yes, that's hard to believe I know, but it is the truth. Listen, in Jude's Gospel, the Book of Jude - the next to the last book in your New Testament you read this:
"Jude, the servant of Jesus Christ...Mercy [to] you, and peace, and love, be multiplied. Beloved, when I gave all diligence to write unto you of the common salvation, it was needful for me to write unto you, and exhort you that ye should earnestly contend for the faith which was once delivered unto the saints. For there are [listen, already in Jude's day, about a generation after the time of Christ; for there are] certain men crept in unawares, who were before of old ordained to this condemnation, ungodly men, turning the grace of our God into lasciviousness, and denying the only Lord God, and our Lord Jesus Christ." (Jude 1-4)
Now how did they deny Him when, at the same time they took His name and they proclaimed that Jesus was the Christ? They called themselves christians, they called themselves followers of Him. How then did they deny Christ? In Titus the first chapter, and the sixth verse you read this; Titus, the first chapter, and the sixteenth verse I should have said:
"They profess that they know God; but in works they deny him, being abominable, and disobedient, and unto every good work reprobate." (Titus 1:16)
You know, my friends, as I've been showing you night after night, day after day, on this program, it's possible to profess Christ, to profess to know God, to accept Christ as personal Saviour, to believe on Christ and to go even further, yes, to worship Christ, and to do it all in vain; and not to really be a Christian at all. Again, I refer you to the seventh chapter and the seventh verse then the ninth and eleventh verses of Mark. Mark, the seventh chapter, beginning with the seventh verse on the next several verses. And notice how Jesus Himself said that already then they were making the Law of God of no effect by their human traditions, their human ways.
My friends, every single prophet that God ever sent, every apostle, every minister that was a true minister of Jesus Christ has come to this world with one message from God and only one. It's the same message that God Himself proclaimed to Adam and Eve in the Garden of Eden, when He told them to obey Him, and when He told them; "...the wages of sin [would be] death... " (Romans 6:23) if they disobeyed Him. He gave them every tree in the garden, but the one, and that one is the one they wanted; that's the one they took, the tree of the knowledge of good and evil. And ever since that mankind has been rebelling against God.

The Need to Accept God's Way

Deception to Set In

The Deceived Don't Know They Are Deceived

Alright, now I want you to notice next in II Timothy; wherefore, Paul says to Timothy, this is the letter of Paul, this is the apostle Paul's writing but it is for us today:
"For the time will come when they will not endure sound doctrine; but after their own lusts shall they heap to themselves teachers, having itching ears [in other words, people would hire teachers, the people themselves wanting their ears tickled with — well, with things that please them]; And they shall turn away their ears from the truth, and shall be turned unto fables." (II Timothy 4:3-4)
Now has that happened? Paul says; "...the time will come..." (II Timothy 4:3) when this will happen. When the people will be turned to fables and when the devil will have deceived all nations - the whole world. Has it happened? Or does your Bible mean what it says and are the prophecies true? Now over here in the third chapter of II Timothy:
"This know also, that in the last days [and certainly that is where we are today; in the last days] perilous times shall come. Men shall be lovers of their own selves [now no real Christian is that], covetous, boasters, proud, blasphemers, disobedient to parents [and oh how much of that we find today], unthankful..." (II Timothy 3:1-2)
Most probably, I won't say definitely, but I believe it's very probable that the most prolific sin today, the most widespread sin today; is unthankfulness, lack of gratitude, ingratitude. Are you thankful for what you have or do you gripe and grumble because of what you think you don't have that you want. Oh, my friends, we need to stop and think. Yes, unthankful, are you?
"...unholy, [how about you?] Without natural affection, trucebreakers [that is their word is no good, they break their contract or their word], false accusers..." (II Timothy 3:2-3)
I wonder, do you carry gossip and without being sure that you have proved it and looking after the fact and you just heard something about someone, do you go around gossiping and saying; "Oh, have you heard the latest scandal about so and so?" Now, do you just love scandal and gossip and malicious gossip and talk about other people? Do you know that the Bible says that we are to speak no evil of others even though that evil be true, you're not to go around repeating it. A real Christian will live like that. Now then:
"...incontinent, fierce, despisers of those that are good, Traitors, heady, highminded, lovers of pleasures more than lovers of God;" (II Timothy 3: 3-4)
My friends, if that does not describe twentieth century people, that even profess Christianity — they may go to church every Sunday, many of them may — if that doesn't describe people today!
"...lovers of pleasures more than lovers of God...denying the power thereof..." (II Timothy 3:4-5)
How much of the power of God is believed in today? How many Christians really believe that there is power in God? For instance, power to heal you when you are sick. By that I don't mean any fanatical kind of healing services now or anything of that kind at all. It's a funny thing; we go to extremes, my friends, either we go to the extreme of denying that God can do these things that He says, or we turn it into fanaticism.
Footnote:
{1} Mr. Armstrong said I John 2:4 instead of I John 3:4.