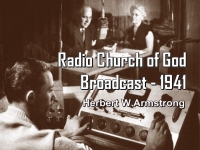 Greetings friends of the Radio Church this is Herbert Armstrong speaking today on world news at the moment and what is prophesied now to come. The United States is not just getting closer to war; the United States today is in the war. President Roosevelt has said that the shooting has already started and history records that Germany fired the first shot and against ships of the United States Navy at that.