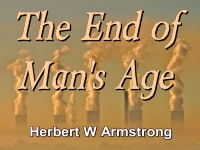 Herbert W. Armstrong founded the Worldwide Church of God in the late 1930s, as well as Ambassador College in 1946, and was an early pioneer of radio and tele-evangelism, originally taking to the airwaves in the 1930s from Eugene, Oregon.
HA220A

How many Kings have been deposed, how many Nations and Governments have been over thrown since 1914? Stop and think practically every Government in the world has been over thrown, but the United States and the British. Where are all of your Kings? Where's the Government that used to be in Italy? Where's the Government that used to be in Germany and in Russia and China? What's happening to this world? We are at the end of an age and this is an age that man has built. This is the world that man has built and man is tearing it down.